Bone regeneration around the neck threads of an ICX implant. One-year control.

This post is the continuation of this last year’s post. It shows how the ridge bone grows and remodels itself around the thin neck threads of an internal hexagon ICX implant with cone-connection.

Once again, you can see the beginning of this case on this post.
The case was indeed very favorable regarding the amount and quality of the soft tissue, although the circumstances were right the opposite regarding the bone. Relatively good width, but scarce height and density, three months after the extraction.
This X-ray was taken on October 9, 2012, a year after setting the crown and 14 months after placing the ICX implant.

It shows how the crestal bone has remodeled itself, growing vertically around the neck threads of the implant.
The soft tissue is really healthy after one year, although the hygienic conditions surrounding the implant are certainly not the best. 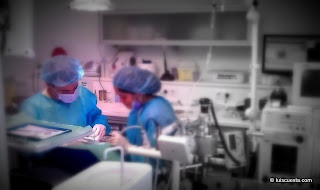 Although the majority of the dental surgery procedures and general dental treatments can be done with the only help of local anesthetics, sometimes general anesthesia  is strictly necessary in order to carry out long , extensive surgeries, such as orthognatical surgery, or neoplassical surgery.

In other cases it is just a matter of patient’s comfort or a patient’s requirement because of his great fear to the dentist, or fear to the dental treatment.
In some cases the use of general anesthesiaallows to carry out a long, extensive, integral multiphase treatment in just one long appointment, which would be perhaps too much for the patient to handle without general anesthesia.

Some countries’ laws require that general anesthesia is carried out in a hospital. In other countries it is a popular method in normal dental offices, where the anesthetist brings his own equipment by the dental chair.

This allows to have all dental equipment, instrument and materials –wich are many more as an ambulatory general anesthesia unit, including accessories- right on the spot in order to provide a better dental treatment.
The way the general anesthesia is carried out depends on the anesthetist’s preferences and likes.

Some anesthetist prefer deep anesthesiasessions no longer as 3-4 hours, without local anesthetics.

Some others carry out not so deep general anesthesia, combined with the help of local anesthetics placed on the treated areas. This has the advantage of allowing longer ambulatory treatment sessions with short recovering periods.

The anesthetist controlls then oxygen, carbon dioxide curve and uses light amounts of anesthetical to induce sleep but on a superficial level, so that the patient can almost breath by his own, while still beign assisted by artificial respiration.

Oral intubation is quicker and easier for the anesthetist, leaves less soreness, but it leaves less space in the mouth for the dental surgeon to work in. Obviously, the mouth cannot be closed. It mostly used for surgery not needing occlusion references, such as third molar extractions, or neoplassical surgery.

Nasal intubation is slightly more complicated to carry out , can eventually leave some soreness in the nasal mucosa, but, on the other hand, it provides free space for the dental surgeon to work comfortably in the mouth. It is used to carry out orthognatical surgeries, fracture correction surgeries, prosthetical treatments, or extensive cavity restorations involving large occlusal surfaces. In this cases the dental surgeon needs to close the patient’s jaw in order to test the occlusion or to splint both jaws after they are set in the new place. Obviously, this could not be done with an oral intubation technique.

This is because the dental implant has no micro blood vessels around it like a tooth has. The blood support for the bone around a dental implant needs, therefore, to come extra from the soft gingival tissue, since the internal bony circulation is quite limited.
Thus, surgical techniques have been developed to provide the dental implant neck with more surrounding soft tissue.
The buccal soft tissue can be of three kinds, free gingival tissue, attached gingival tissue and alveolar mucosa.
•    The free gingiva is made of non keratinized tissue. It surrounds the neck of teeth and implants and its inner side forms the gingival sulcus.
•    The attached gingival tissue is made of keratinized fibers and it is associated to masticatory function. It lays between the alveolar mucosa and the gingival groove. It has a characteristic orange-peel stipplings in a healthy state.
•    The alveolar mucosa is the non keratinized continuation of the attached gingiva towards the cheeks and lips. It is movable, too. Between this two there is a characteristic line, limiting what is attached and what is movable.
The attached gingiva has proved to be the most deciding part in the long-term preservation of the ridge bone around the dental implant neck. You want to have as much of this tissue around your dental implant as possible. Obviously it cannot be augmented infinitely beyond the anatomical boundaries and the surrounding soft tissue limits. There is an intimate relationship between the bone ridge laying underneath and the soft tissue above it.

In this clinical case we see how a unitary dental implant is placed on the extraction site of a lower first molar that had severe periodontal damage due to an insufficient root canal treatment.

This is the resulting state of the attached gingiva after the healing phase, prior to the dental implant exposure surgery.

In this exposure surgery, a roll-up soft tissue enhancement technique is employed. This roll-up surgery pursues to increase the attached gingiva thickness on the buccal side around the dental implant neck.
Since the external layer of the flap will be submerged between periosteum and the attached gingiva, this external layer -which served as mastication surface on the edentulous space- needs to be de-epithelized.
De-epithelization is the removal of the thin outer most layer of keratinized cells, so that the flap quickly bonds itself to the inner tissues where it is laid. This is done with a sharp scalpel blade or with a diamond drill.
After rolling in the flap towards the side pouch, it is fixed by means of a 6/0 nylon micro suture, that can be removed after seven days.

The roll-up technique deals with the inside folding of the attached, keratinized gingiva covering the implant, which is moved to the side and rolled in between the periosteum and the outer attached gingiva while creating a pouch for it.

The prosthetical phase starts with the impressions, in this case, with open tray abutments.

The next step is the design and construction of abutment and crown for the ICX implant on the cast model. This implant model provides platform switch, internal hexagon and cone.

The abutment is screwed onto the implant with 30Ncm torque-control

And the crown is inserted over the abutment. Due to its rounded shape, it pushes somehow the gums while it slides in place, producing temporary ischemia -compromised blood support-, as seen on this pale shade around the crown.

The gums are a flexible tissue and they adapt themselves to the new situation in a matter of minutes or some hours at the most.

The result is a new thicker keratinized attached gingival band around the dental implant neck.